Preparing for a Party at Home? Read These Quick Tips 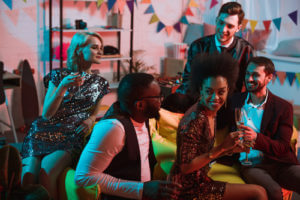 So, that inexplicable, overwhelming surge of enthusiasm that so often precedes the holiday season made you reckless and daring enough to plunge into the unknown. You’ve announced you were hosting a house party. Chop-chop, then, and get to work! The house isn’t going to clean itself, so it’s either joining forces with professional Brentwood home cleaning or DIY all the way, but it’s got to be thorough and well-thought-out. If you are preparing for a party at home and need to think fast, check out these quick tips!

You’re welcoming people into your home, yes, but not all of your home, thank you very much. All joking aside, party people – even if they are your people – should be banned from accessing some parts of your home. Also, put away any valuable, delicate, fragile items that your tipsy friends could accidentally knock over.

Think ahead to reduce the post-party workload

Make small investments that will make your life much easier after everyone’s left the house and you’re stuck with the cleaning. These include disposable mats for the floor and the tables, chair and sofa covers and the like. Depending on the party style, atmosphere and the number of people you expect to show up, consider whether plastic and paper cups and plates are acceptable.

Easy-to-grab paper towels are a terrific, handy solution for a quick response to spills and the like. Set up two or more garbage bins to get the guest to clean up after themselves and reduce your post-party workload.

Remember, you’re preparing for a party at home, not competing for homemaker of the year award

What’s really awesome about this is that there is no deep cleaning involved! You’re trying to organize a party, make the post-party cleanup easier, and, last but not least, make the party more enjoyable for yourself. It’s not about organizing your whole house – just decluttering to get stuff out of the way and keep them hidden from view.

How long should preparing for a party at home take?

Now that we’ve covered the steps done beforehand (stocking up on all the supplies and organizing things), how much time should the pre-party cleaning consume? Well, assuming that you’ll be doing all the cooking on the same day, immediately afterwards. The kitchen is bound to be the messiest room in the house, so do that first. Wipe down all the surfaces and load that dishwasher as many times as possible. Sweeping and vacuuming the floors are a must! Use dust wipes as a quick solution for any dust-prone areas. But, if you stick to these basics, it could all be done and done within an hour, or less, if you’re lucky.

Preparing for a party at home sounds like more than you’ve bargained for? Not with MaidThis!

Scrubbing the toiler or washing a heap of dishes is not exactly what you have in mind when you think about party preparations. Preparing for any party, even one in your own home, should be fun: getting some rest, dressing up, changing the hairdo, putting make-up on. Besides, who feels like partying after they’re all worn out from doing chores! Fortunately, MaidThis is always on your side! Let us match you with professional home cleaners who will do such a flawless job cleaning your home that you’ll be absolutely speechless! Call MaidThis and let’s do this!

Using the platform was super simple. I've used my cleaners five times now, and the one time I did have to reschedule it was super easy, hassle-free. It's really simple, it's easy, and they've done great job.
Gus Los Angeles, Ca
20+

My wife and I are thrilled how easy everything is with MaidThis, and now I’m a customer for life! If you don’t want to go through the hassle of finding your own cleaner, definitely try MaidThis
Jordan Redondo Beach, Ca
25+

I work a full-time job and I have a small kids at home, so by the time I get home the LAST thing I want to do is clean. If you need to save time, I recommend going through MaidThis. Their customer system was amazing.
Suzy Los Angeles, Ca
70+